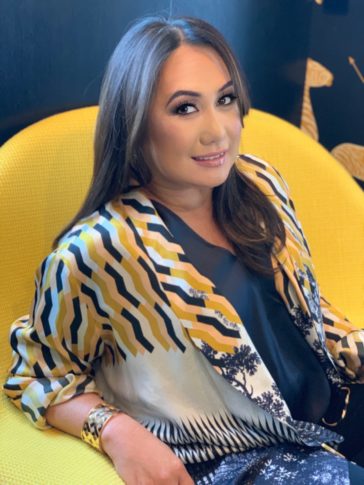 Melissa de la Cruz is the #1 New York Times, #1 Publisher’s Weekly and #1 IndieBound bestselling author of many critically acclaimed and award-winning novels for readers of all ages. Many of her more than fifty books have also topped USA Today, Wall Street Journal and Los Angeles Times bestseller lists and been published in over twenty countries.

De la Cruz is also known for the Blue Bloods series (with three million copies in print), and the Witches of East End series. Her recent book releases include New York Times bestsellers The Queen’s Assassin and the Alex & Eliza series, as well as the graphic novel Gotham High and The Birthday Girl.   Her next release is her upcoming middle grade series launch, Never After, publishing December 2020.

De la Cruz’s Hallmark Christmas movies, Christmas in Angel Falls and Pride Prejudice and Mistletoe (based on her novel), were both the top-rated movies for their Christmas season on the Hallmark Channel and Hallmark Movies and Mysteries. 29 Dates, her YA novel about a Korean exchange student, will soon be a feature-length movie on Disney’s streaming service, Disney+.

Melissa is also the founder and principal of Melissa de la Cruz Studio at Disney Publishing, which will create and package books in every genre and age range but with a focus on middle grade and young adult, from a diverse group of new and established writers that will appeal to all the platforms across the Disney company for a global audience. The projects will reflect Melissa’s humor and taste and range from adventure, romance and fantasy to contemporary stories.

Melissa de la Cruz is the co-director of YALLFEST (Charleston, SC) and the co-founder of YALLWEST (Santa Monica, CA), the two largest and most vibrant young adult book festivals in the country, attracting more than 30,000 readers every year.

Melissa de la Cruz grew up in Manila and moved to San Francisco with her family, where she graduated high school salutatorian from The Convent of the Sacred Heart. At Columbia University, she majored in art history and English. She lives in West Hollywood with her husband and daughter.