My Problem is You

This is one of my favorite pieces of art: 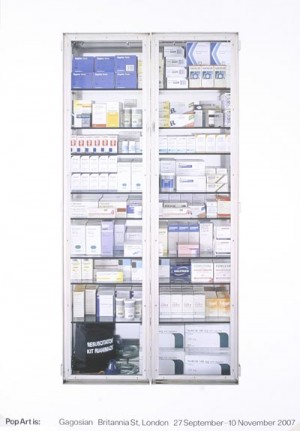 It’s Damien Hirst’s My Problem is You.

I stare at it every day as I’m putting on my face creams (a four-step process lately), as it is displayed in our master bathroom. It never ceases to amaze me how many different kinds of drugs are in this cabinet. And their names! Floxacin. Temazepan. Some of the drugs I recognize (Valtrex: who could forget those commercials?). Some I’ve seen from my dad’s chemo regimen. (Didn’t he take Fluorouracil?)

I mostly love the juxtaposition of all the prescription drugs with the title: “My Problem is You.”

Every time I look at it, it makes me think of something new: anxiety, depression, sadness, cancer, hope in a jar, the health care industry, pop art, which then makes me think of my dad, or my work, or Andy Warhol, or how lucky I am that I don’t suffer from any ailments that require me to take any drugs. My family had only one way to deal when life got difficult. Can you guess? As Paul Rudnick said so eloquently in “I’ll Take It” – “We worked it out in the sale rack.”

My dad went through the highs and lows of cancer with very little mood-changing or mood-lifting pills, much like he weathered all the changes in his life. (And needless to say, he was a shopper.) He was a naturally happy person, a raconteur, he’d once been an investment banker with his own fund as well as a cafeteria operator at Sears, he was a CEO and an immigrant, he loved limousines and gossip rags, New York City, fancy hotels, mall Chinese food, thrillers, the Ivy League, and us, and not in that order. When we learned the disease had finally arrived at its final stages, his first words to us were “Don’t despair.”

Two days before he died, he was joking with us that the nurse who prayed the rosary with him who kept getting the words wrong. He kept telling me to Stop Crying. He wanted us to be happy and to remember him like he was: dancing at our weddings, teasing us, laughing as he picked up a pair of chopsticks (he had a particular fondness for meals that required chopsticks), all those marathon poker games where he’d bluff to oblivion.

It is so freaking hard to Stop Crying.

But I try to remember. Don’t despair.

And so instead of drugs in a medicine cabinet, we have a picture of them framed on the wall.

It’s a very reasonable piece of art, it’s just a poster, and if you want one the Gagosian will sell you one happily, online even, unlike say, if you want to buy an original Jeff Koons, you can’t, since they “place” them with only the right museums or collectors—as in, vulgarians need not apply according to the delightfully snobby art dealer.

I never know what looking at it will make me think about, and that’s the fun of it.

Mike and I were out at dinner on our weekly date night several months ago. (Shut up. I don’t think it’s pathetic to call it “date night”. I actually think it’s rather sweet. Because before we had the kid, like typical New Yorkers, we went out almost every night, and we just took it for granted. Now because we only go out once or twice a week we dress up, and we try to have you know, conversation instead of the usual honey-do lists and chore wrap-ups.) Anyway, we were in Joel Robouchon in Las Vegas and feelin’ romantic.

We hopefully never look like this on Date Night. 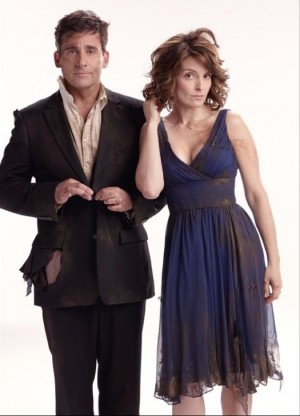 That night, I told my husband about the whole phenomenon of the manic pixie dream girl, and I did my whole rant, how I hate how some guys idealize a type of quirky, cool, unknowable, mysterious and CRAZY girls and how I simply hate those kinds of girls, and those kinds of movies (500 Tedious Days of Summer, etc) how the whole thing was so offensive because boys of a certain type just worship these chicks and uggghâ€¦.they SO don’t deserve it and why can’t anyone just make a movie about falling in love with a nice practical sweet girl and not some manic pixie dream girl?

Zooey. The embodiment of the Manic Pixie.

And then Mike said, “But you’re MY manic pixie dream girl.”

WHAT DO YOU MEAN??? I asked my husband.

In answer, he did a checklist: QUIRKY. COOL. UNKNOWABLE. MYSTERIOUS. SEXY. (Blush) and mostly, CRAZY.

While I see myself as a rather staid, infinitely practical and completely predictable person, the kind of girl who is a girl’s girl, someone who’s always “the friend” and was never the WAIF, NEVER the kind of girl who ever has to be RESCUED or some ridiculous thing like that, the girl who is more of the “sidekick” rather than the star, my husband thinks I’m hot and crazy. Which is apparently a good thing.

Maybe our relationship is just volatile. Or maybe I am a manic pixie dream girl. I dunno. (Sort of doubt it really.)

But god if that wasn’t the most romantic thing my husband ever told me.

So, to all the manic pixie dream girls out there. I apologize.

Garth. I’m not a pixie. I always thought of myself as a Garth. 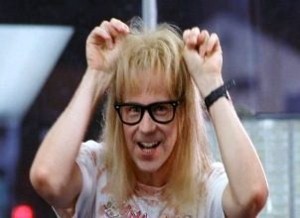 When I was younger, my girlfriends and I had this favorite urban myth about our love lives. This one went, “someone is in love with you, you just don’t know it.”

This romantic fantasy that we absolutely believed in was that there was someone out there, watching, admiring and yearning for us (not in a stalker way but in a sweet Hollywood movie way)â€“ but he would never come forward because he was just too shyâ€¦ and we would never find outâ€¦ until you know, class reunions or drunken confessionals or something.

This fantasy made us single girls feel very specialâ€¦ that even if we did not know it, even if we were lonely, or alone on Valentine’s Day, or dateless on a weekend night, someone, out there, was totally in love with us.

At least, I found it romantic until it happened to me.

When I was 23 some guy came up to me and told me he had seen me every day at my subway stop for months and now he was finally getting up the courage to ask me out.

You know what I said? 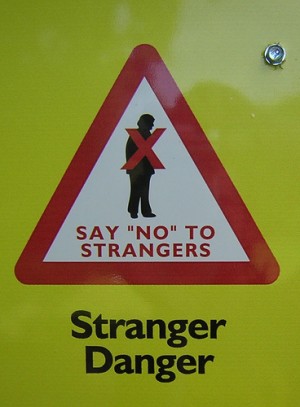 I practically ran the other way and I never went to that subway stop again. Even though the guy was actually pretty cute and dressed in a suit and probably completely normal except for that one admission.

Because you know what makes the SECRETLY IN LOVE fantasy work? KEEPING IT A SECRET! LOL! 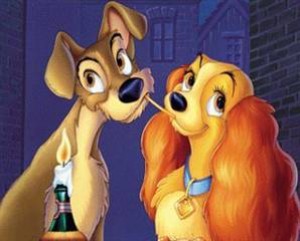 For more manic pixie dream girl stories, read Reality Matters. One of my favorites is Neal Pollack’s Married By America, which talks about the Crazy Girl Phenomenon.

I’m still here. Just been working a lot, trying to make my deadline for MISGUIDED ANGEL and lots of deadlines right after—it’s like a train wreck—if I don’t make this deadline then the rest of the book caboose suffers. So it’s been nose-to-grindstone over here and blogging has been left to the wayside.

Just popped in to share that I will be tweet-sneaking peeks at KEYS TO THE REPOSITORY starting May 21st! So don’t forget to follow me if you want to see them. The book comes out June 29th!

I’ll be back once I turn in the book and then probably will disappear again until about September when all my books are FINALLY turned in. Am taking my summer vacation in the fall. 🙂