As you all know I do not pack “light”. In fact, I have been on many book tours now in my tenth year as a full-time writer, and I have never not checked a bag. I am very familiar with overweight fees. When I was still working in fashion, my dream was to have my luggage Fed Exed to my destination like all the glamorous editors when they went to Fashion Week in Paris and Milan. However, book publishing is not quite so frou-frou and authors are a more practical bunch. Our tribe wears flat shoes, packs a carry-on bag, and calls it a day.

So you know, I’m totally the wrong person to send on book tour. In fact, a lot of my media escorts always comment on HOW HEAVY my suitcase is. (I bring two outfits for each day. A casual one for the airport and travel and a TADAH! one for the event. Everything is in its own plastic dry-cleaning bag so they don’t wrinkle and I pack the accessories for the day with each outfit. I learned this from Martha Stewart.) 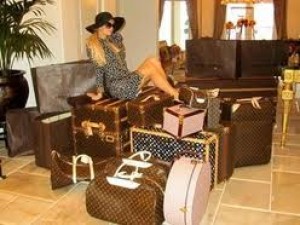 Paris Hilton with all of her luggage. I am not this bad. I cannot use my luggage as a recliner. Yet.

I bought so many clothes for book tour last year that I did not even wear. My friend Minty who was moving to Paris was my shopping partner in crime. We would buy something and Minty would go “It’s for PARIS!” Because you know, you can’t find Lanvin flats or Chanel bags in Paris. No! And I would go “It’s for BOOK TOUR!” We were totally enabling each other in the worst way.

Anyway, sometimes when I think of my dad I get very sad but today as I was thinking about what to pack for book tour I remembered Pop and I started to laugh. Last year, my cousin got married in Toronto. It was August, and it was about three months before my dad passed away. We didn’t know then that this would be his last trip, although we definitely FELT it. He was very weak, and when we walked to the airport terminal from the security line, it took about half an hour and I remember thinking then that it was SO FAR AWAY. But I was there again recently and it amazed me how short the distance really was. It just didn’t occur to me that my dad was really sick. I mean, I *knew* it was bad, but part of me did not accept it. So I just opted not to notice.

We were traveling to Toronto with my kid, her nanny, my mom, my dad who could not walk, and all of our carry-ons. WIth the stroller and the carseat and all the bags, we were quite a caravan. My husband wasn’t with us since he had to take a later flight for work. So it was a bunch of ladies, a little kid, and my dad who was dying of cancer, dealing with all of our luggage. I ended up having to play the part that usually went to my husband, which meant I was in charge of the luggage and everything else since my mom had to tend to my dad, and our nanny to the kid. I was the one who flattened the stroller, unhitched the go-go-baby cart from the carseat (which went on the kid’s airplane seat) and make sure we went through security with everything we had brought with us. Not an easy task. 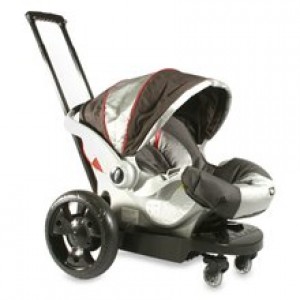 The Go-Go-Baby. One of the hardest things about parenting is figuring out how to unlatch it. Warning: causes marital discord.

While I was doing all the unhooking and flattening and removing laptops and DVD players and putting them back in their cases and counting carry-on bags, I was also very INTENT on making sure my garment bag—the one with my fabulous new Oscar de la Renta beaded evening coat that I was planning to wear to the wedding, would NOT GET LOST. As my family went through security and I sent all of our stuff through the X-ray machine, I kept yelling “POP!! THE DE LA RENTA!!!!” And I would point FRANTICALLY to my garment-bag as it went through security, since I HAD to make sure someone related to me was on the other side to catch it. I would look down and fold the stroller, look up, eye my garment bag, point and wave and shout “THE DE LA RENTA!!”, then remove the laptop from its case, look up, and check, and again yell, “THE DE LA RENTA!! POP!” I probably yelled this about half a dozen times. 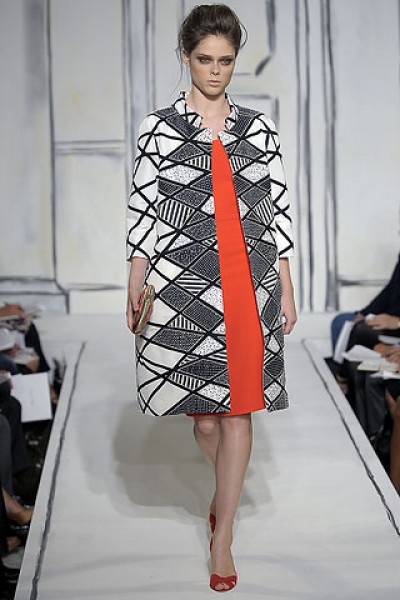 The insanely fabulous de la Renta coat. I wore mine with a red Lanvin dress.

It was Pop’s job to make sure THE DE LA RENTA made it safely to Canada. It was a really light garment bag since it only contained the coat and the dress, and so he carried it. As I was sweating through security, frantically making sure my fabulous piece of designer awesomeness did not get lost, my dad suddenly began shouting back at me, “THE DE LA RENTA!!”

And it was then that I realized what an ABSURD spectacle I had made. For some reason I was convinced that if I took my eye off the prize, someone would snatch my fabulous new coat from me. I began to laugh, and everyone in my family began to laugh.

Now anytime we need to laugh my mom and I just say to each other THE DE LA RENTA!!! and we remember my dad and that crazy trip and how stressed I was ABOUT A COAT. How silly it must have seemed, with everything we had to worry about in August. (My dad would have surgery a week later, and we were all terrified to think about it.)

Maybe it was easier to worry about my clothes than about how my dad couldn’t walk anymore. In any event, instead of bopping me on the head and calling me a shallow fool, my dad just made fun of me and took all the stress out of a tense situation. My dad UNDERSTOOD about designer clothing (the de la Renta!!!). The man wanted to be buried in his tuxedo so he could look his best when he met his maker. Pop thought of Heaven as a Black-Tie party. 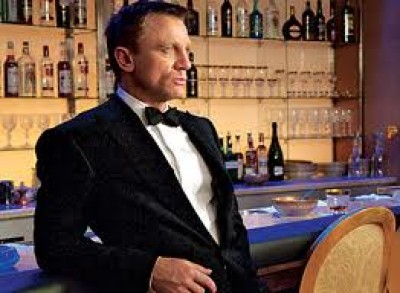 James Bond is my idea of Heaven too.

Not a day goes by without thinking of my dad, and some days are easier than others. We shared a birthday, and this year I had my first birthday without him. I had been dreading it and I was so depressed on the days leading up to it. I normally have a list of shiny pretty things I want for my birthday but this year I didn’t want anything at all. Nothing can bring my dad back, no matter how much I wish it. We had so many wonderful birthdays together. I remember the fancy Chinese banquet we had when I was eleven in the Mandarin Oriental hotel. I remember the one when I was nine and we had magicians and clowns and fairground rides in the backyard. We always had two cakes. One for Pop and one for me. On our birthdays we would rush to see who could call each other first, which is why we always had to call each other at the ungodly hour of 6AM. “Happy Our Birthday” we would say to each other. Pop always insisted on singing.

Anyway. I won’t be wearing the de la Renta on the Smart Chicks tour. (I believe unlike Heaven, the tour is not black-tie.) But that doesn’t mean I won’t be wearing something worth screaming across the security terminal for. Just watch out for the crazy lady waving at her husband and yelling “THE CELINE!!!” 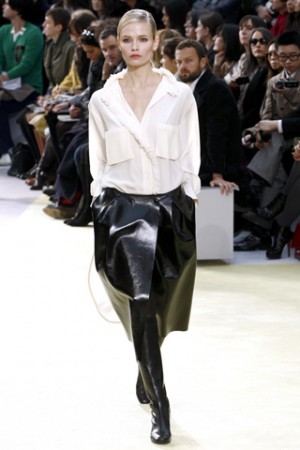